The Road To Disability 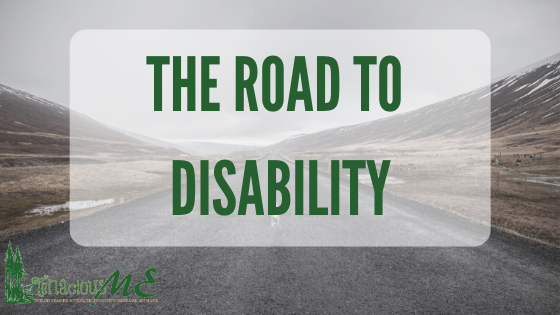 When I started this blog, I was already well on my way to a brighter, happier, more mobile place. I’d done a great deal of learning, experimenting and hard work over the last few years. Work that lead me out of the dark and back into a version of me I feel like I can live with. So, I started sharing, first by sharing my diagnosis story. Then jumped into the here and now, because that is where I am. Recently it dawned on me that I skipped the best parts of my story. Not the best as in the times I won, the times I stood back up, but the achingly real time that saw disability claim me. The un-abling if you will. I very conveniently skipped right over that chunk of time as though my story is I had a thing, it got diagnosed, and then I was disabled. That short and sweet version skips over all the meat, all the blood and gore. No surprise I chose to do that, its not a wreck I’m comfortable examining, there are bits of me still trapped in that disaster. But I’ve realized, not sharing is not being truthful. It’s time to give it an honest look. Because this struggle we share isn’t all pushing through and winning. Sometimes it is wallowing in the dark, in a pool of tears. So, here we go, into the dark (don’t worry, I packed a flashlight).

The un-abling began before diagnosis. If you’ve read my diagnosis story, you may have guessed that already. By the time I was properly diagnosed, many parts of me where already well on their way to permanent damage. I had no idea at the time, how those stiff and swollen joints were changing. Had I understood RA better, I may have acted more swiftly. Then again, I am me and I do nothing without turning it over for a month so, perhaps not. It’s so easy looking back to see the times you could have chosen differently if you’d only known, but reality is what reality is. Choices are made, time passes, consequences arrive.

My un-abling came slowly. RA began whittling pieces of my body and my very life away before it was even given a name. Within two months of diagnosis I realized that the job I was working at was far too repetitive for my joints to handle. The symptoms were getting worse by the day, as was my ability to keep up with the demands of said job and raising a family. I knew something had to change. So I took a leave of absence, promising myself that with rest, targeted exercise, and the treatment plan my rheumatologist and I made, I would get better and be able to return to work. I thought that until three days before my leave of absence was over. Then reality hit like a ton of bricks. I was not getting better. In fact, I was worse. The medication wasn’t working, my hands were hardly functioning, I would not be able to return to the job I’d come to love. The funny thing? Until my supervisor called and asked how I would be able to keep up with my job, I still had been telling myself I somehow could do it. His words were a much needed reality check. I remember telling him I don’t know, and the tears began to fall, as I realized the truth, I was no longer a person who could do that job. So I resigned, signed the papers later that same week, and then had a good long cry in my car before making the trek home to my new existence.

For a few years, that’s what I had, an existence. I was here, but not here. Looking back now, I realize that losing the ability to work sunk me into a rather deep depression. Ability was such a huge part of how I saw myself, to lose it was devastating. I was the kind of person who never thought twice about tackling hard work. The kind of person who often made her own solution with Yankee ingenuity and a little muscle power. And here I was, unable to open a bottle of water. I was lost, I was broken, I was permeated by a deep sadness, and I was SO mad! Mad at the doctors who misdiagnosed me for decades, mad at the medicine that made me feel worse instead of better, mad at the body that had for some reason decided we were enemies, mad at that water bottle I could not open. For years.

So, I punished myself. Unable to do whatever I wanted, I chose instead to do nothing I wanted. Frustrated by the things I could not do, I slowly stopped doing everything. Part of me was certain I deserved this, earned it, that it was something I had done to myself. Unfortunately, the internet tended to agree. It promised if only I took better care of me, I wouldn’t be where I am. Something that alternatively spawned hope and despair in me. Hope for healing, despair for my inability to do enough to make that happen. I was failing my biggest test. I hated myself for it.

Eventually, all that despair and hatred started to show. Rock bottom was approaching. It would arrive shortly after I was approved for disability. Never has a win felt so much like a loss. Never has relief brought with it such deep, dark grief. Disability meant help in the form of income and health insurance, both of which I desperately needed to fight RA. Unfortunately, being swiftly, without any fight, approved for disability, also meant I really was disabled. The words total and permanent leapt off the page. The system had spoken, recovery was no longer expected for me. Reality was devastating.

I soon began to shrink as my depression continued to grow. Before I found my way out of the dark I would weigh a terrifying 89lbs. A skeletal version of my former self, my outsides now matched my insides, shrunken and hollow. At the time, the weight-loss was a mystery. I had no idea why it had started, even less of a clue how to stop it. The overwhelming hopeless voice that had taken over my psyche was certain I was dying. I will be ever thankful for that thought, whispered in the dark. For finally there was something else blooming in the darkness. Fear. And what does fear do when it awakens in the darkness facing an overwhelming foe? Fear wakes Hope. Needing an ally, it triggers that ever present will to live. Fear rings the alarm and Hope springs into action. Glorious, radiant Hope.

Still broken and battered, I began once again to care, to believe that I had the power to change this destiny. I decided that I wanted this broken life, and started building a ladder to get out of the pit I found myself in. I’d love to say I immediately started gaining weight and feeling better, but that is not how the story goes. It would take many months to begin to see positive changes. At first, I continued to lose. I see now what a blessing that was. How that time allowed Fear to settle in and really give Hope a much needed kick in the ass. How much I needed to fear losing my life to find the will to fight for it. And find the will I did. Slowly but surely, I began to turn things around. I gained weight, strength, and belief in myself. The stronger I got, the more hope there was. As the number on the scale reached a safe zone, I turned my rediscovered will to fight to other things. I began looking for ways to heal again. I finally remembered who I really was. Glass ½ full, anything is possible, question it all, try anything once, never give up, Tenacious, ME.

Do you struggle with depression? You are not alone. Please reach out, seek help and companionship. Together we can light the darkness. For help and understanding call the National SAMHSA Helpline  1-800-662-4357 or the Suicide Prevention Lifeline 1-800-273-8255 .

← What lifts you up?
Keep Warm and Carry On- Surviving Winter with Arthritis →